Selena was the biggest female artist in the Tejano industry and poised to crossover when her life was cut short on March 31, 1995.

“The Queen of Tejano Music” lives on through the voices of today’s rising female Tejano singers.

“She is every reason I pursued Tejano music,” 2014 Tejano Music Awards Best New Female Artist Crystal Torres told TejanoNation.net.  “I was 12 when she passed away and a huge Selena fan.”

Torres, who grew up in Iowa, recalls a chance she had to see Selena in Chicago.

“I had the opportunity to go see her perform three weeks before she passed away, but since our Spring Break vacation was a week after the concert, we were unable to go.  My mom gave me the reasoning that we would go see her next time. Unfortunately, there was no next time. I was heartbroken.”

“Although I did not know her personally there is not a day that goes by that I don’t miss Selena and wonder what would have been,” Torres added. “Selena motivated me to follow my dreams.” 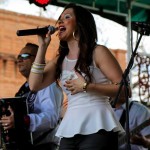 Mazmorra Records artist Megan, who just released her debut album Mi Diario on March 11, is another young singer that was impacted by Selena.

“Selena was and still is a huge influence in my life, she set the path for all other female Tejano artists to stand up and take a chance,” Megan told TejanoNation.net. “She is the main reason I am here today still shooting for the stars.”

“There will never ever be another Selena, she was one of a kind, and will always be the one and only “Queen of Tejano” in my book,” Megan added. “Selena is the reason that many artist and upcoming artist including myself will continue to strive for success!” 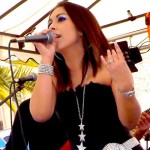 Beatriz, who just released her debut album Mi Tesoro with her band DeZtino on March 1, recalls special times she had with Selena.

“When she performed in town I would be eating cookies with her backstage on her bus,” Beatriz told TejanoNation.net. “She promised to help me, but always told me to finish school first. Unfortunately, she passed before I finished school.”

“She always put 100% in every show and that’s what I try to do as well. She made sure that she gave the fans the show they came to see and hear,” Beatriz said. “She had pride in her music and image. That is why I put so much effort into making sure my music, image, and show is something the crowd will enjoy.”

“Selena proved that if you just work for it, you can accomplish anything,” Beatriz added. “It took me 10 years to come out with a full product/CD which proves that if you just have faith and believe in yourself, your dreams can come true. ‘Anything is possible’.”

“There will never be another Selena,” says “La Tejanita” Marisa Cortez. (Facebook)

“La Tejanita” Marisa Cortez, who is currently working on her first album with super producer Gabriel Zavala, was born 10 years after Selena passed, but feels a connection with the late singer.

“Though I didn’t have the opportunity to personally meet her, I feel like I have a connection with her from listening to her music, reading the book, watching the movie, and from meeting her family,” the 14-year-old singer told TejanoNation.net. “Selena is a Latina Legend who was beyond beautiful, amazingly talented, and yet so humble.”

“There will never be another Selena, and she will always be missed dearly,” added Cortez. “If she were here today, I’d love to say ‘Thank you bunches, you are amazingly awesome, and will always be my inspiration!'”

“Selena was one of a kind,” says Nataly. (Bobby Villela/Bobby V Photography)

Nataly, who released her debut single “Dime Como” earlier this year, was inspired by Selena’s passion and personality.

“Selena was a big inspiration for me as I was growing up,” Nataly told TejanoNation.net. “Just seeing her passion for music and her charismatic personality made me want to be just like her.”

“She was very humble and true to herself and fans,” added Nataly. “As a singer and entertainer we all hope to follow in her footsteps and leave some sort of legacy as she did.”

“I was so moved by her spirit,” says 2014 TMA Best New Female nominee Veronique on Selena. (Yeey Click Photography)

“I was four years old and I couldn’t speak. My family was worried there might be something wrong with me, but the doctors and specialists said I was fine. It would just require patience. I’d speak soon enough,” Veronique told TejanoNation.net.

“Well, one day as I sat in front of my grandmother’s TV and watched Johnny Canales say, “Take it Away,” the person that greeted me with her personality and music moved me to speak,” recalls Veronique. “Within a week I was singing her songs, and moved to make my mark on the world with my voice.  The woman who caused that, was Selena.”

Veronique, who also co-hosts Puro Tejano TV, got to know Selena through her music and videos.

“I never got to meet her or see her in person, but what I have to remember her by: videos and memories of how her music made me feel; makes me strive to impact people with my music the same way she did,” Veronique added. “If I can do that, then I know I’ve done her memory justice.”

2011 Tejano Idol winner Ashley Borrero, now a part of Angel Gonzalez Y Vimana, was impacted by Selena at the age of 7.

“Some might say that is too young of an age to be truly impacted from someone, but they are wrong,” Borrero told TejanoNation.net.  “Before Selena passed, I had her posters on my wall, listened to her music, watched her on T.V. and knew that one day I wanted to be just like her.”

The day of Selena’s death was a life changing event for Borrero.

“I remember that day vividly. We sat around the television that night watching the news of her passing, all the candlelight vigils, and I was inconsolable,” Borrero recalls. “I cried myself to sleep that night and even as a child I felt a responsibility to make sure her legacy lived on.”

Selena was the reason Borrero chose the Tejano music genre and even helped her win the very first Tejano Idol competition in 2011.

“I had already had a love for Tejano music ingrained in me from birth thanks to my parents, but it was Selena and her music that helped me choose the Tejano genre when deciding my professional singing path,” Borrero said. “It was her song “Contigo Quiero Estar” that won me the title.”

“She was so incredibly dedicated and I think we can all use some of that same dedication not just in music but in anything we choose to do in life,” Borrero added.

Today as we honor and remember Selena, we can see the impact she had on the new crop of female Tejano singers.  There may never be another Selena, but it’s great to see that the future of Tejano music is bright with these passionate talented ladies, with the drive to be the next Tejano superstar.